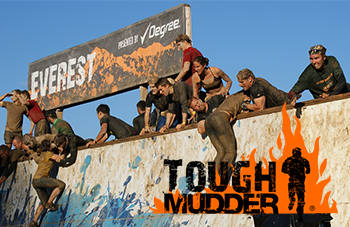 It’s been a few days since I crossed the finish line for Tough Mudder. I felt my fitness after some pretty heavy training beforehand, but I wasn’t prepared for how sore I would be – I’m still aching now.

Including myself, the team was five-strong and opted for the full course, which was just short of 12 miles long and includes over 20 obstacles. Our leg was mid-morning on Sunday, which we thought was a strategic move to avoid the crowds, but the Saturday event had already taken its toll. The course was pretty torn up by the time we got going, paths had been turned into ploughland. Pulling your feet out of the mud with every step seemed to use twice as much energy.

The course twisted constantly, hills lasted forever, water was like ice, mud pools were waist-high, tree roots were like trip wires, but we made it through pretty unscathed and in just over two hours. We only stopped running when it was time to confront the obstacles, most of which cannot be accomplished alone. Scaling high walls needed leg-ups and lifts, no matter your height. Half-pipes slicked with mud and grease required some generous dangling hands to reach for. Elaborate human pyramids became climbing frames up hillsides.

Towards the end, with cramp setting in, even the individual obstacles were only passable with some moral support. What seemed like corny sentiment from the course inductors, about all participants being “one team,” actually turned out to be completely true. I found that everybody wanted to help where they could. The help you received from others made you more determined to pay it forward – which a similar reason why I wanted to do something for charity. With enough help from others, perhaps we can all pass even the toughest obstacles. – Steven Ackroyd (Aftersales Manager)